Here is my newest preview for Selena Jones: The Hunt Featuring Sherlock Holmes. This includes the letter at the beginning of my book, the prologue, and chapter one. This is a very rough draft, so please excuse anything that may be incorrect or any errors you see. There are parts that I have left out or taken out for this preview only.  I also do not have chapter one titled yet. No titles have been given to my chapters. I have only numbered them at this point. Editing has not been done yet. There is grey on the sides because I have notes on my document and cropped my document as a PDF just to post on here. I do hope you enjoy the unedited opening of Selena Jones: The Hunt. Click below:

The Hunt
The link will take you to my site where the preview is posted. I couldn't get the full PDF to post here. Sorry, but you can view it by clicking on The Hunt.
Posted by Jacquelyn Applegate at 10:49 PM No comments:

Here is a link to my Selena Jones mysteries featuring Sherlock Holmes. Please click like to help out. they are all appreciated.
Selena Jones Mysteries
Posted by Jacquelyn Applegate at 4:07 PM No comments:

Back cover for Selena Jones: The Hunt Featuring Sherlock Holmes

Here is my back cover as of today. I believe I have it finished. Or so I hope. Slowly getting the book done one step at a time. You can click the link below the picture to take you to my site and see the cover larger if needed. 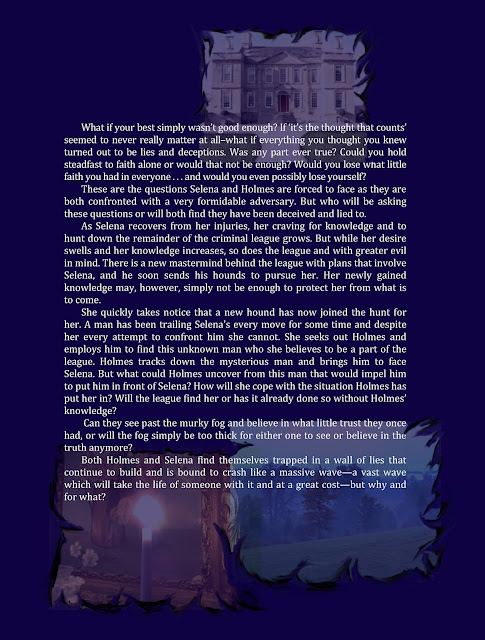 Selena Jones The Hunt
Posted by Jacquelyn Applegate at 4:03 PM No comments:


Now available for Nook $2.99. The preview on Barnes & Noble does not read correctly and neither does the iBookstore preview/ sample but once downloaded, the book is fine. No issues with reading the words or changing font or sizes. It is just an issue with the preview.  Once it is resubmitted to fix, it will be down for a while. It is an issue with the font going through for the preview. Again, there is no issue once on the Nook or Apple devices. You can look at the preview on Amazon Kindle if you wish to view a sample of the book since there is an issue currently with the epub preview. Thanks. Selena Jones for the Nook
Figured out the issue with the preview for both iBookstore and Barnes & Noble. Fairly easy fix. Bad part is that the book will probably disappear for a little while or be unavailable for a short period while it gets updated. It may happen quickly or may take a few weeks. The book may stay available until the site is ready to update again(So far, the book is still up as of 6/5/13). Not sure how they will deal with updating and going through the process of adding the book back on. But I'll leave the links up in case. The font has been changed but nothing else. It won't be noticed on any of the devices. It only had issues with the preview. The file was still in a font that worked with Kindle but not with Nook or Apple devices such as iPad to read the epub file. It did convert over just fine once bought just not on the preview. Therefore, the viewer didn't know what to do with the words/ font and jumbled it all up. Problem solved for the preview on both sites. :)
Posted by Jacquelyn Applegate at 7:03 AM No comments:

Selena Jones Trial and Error Featuring Sherlock Holmes is now on iBookstore. You can look it up by searching Selena Jone Trial and Error or click link here. Selena Jones iBookstore. $2.99 in the store. It has been approved and accepted for Nook but still waiting to be listed on the site. It takes a while to show up.
Posted by Jacquelyn Applegate at 10:55 AM No comments:

Here is a link to my website for my book. Just click the title of my book: Selena Jones: Trial and Error Featuring Sherlock Holmes.  There is a preview for chapter nine on my site. Feel free to email me with any questions or post back. My book is available in paperback and on Kindle. I am still waiting for final approval for it to go through on the Nook. Shouldn't be much longer for the iPad. It shows a link for the iBookstore and says it is available, but it still is not up yet. May be another week for the iPad.

My book is about a woman who loses a close friend, her only friend, due to murder. She takes the matter into her own hands when the police are unable to find the men. When she fails to return, however, her maid becomes rather worried and requests the help of Mr. Sherlock Holmes.
Holmes finds Selena but realizes he has seen her before and she is no ordinary woman. Who is she? Holmes is not all too happy with her working alone and going after these men, but he is intrigued as to how she has managed to do what she has done.
Selena finds herself in more trouble than she bargained for when she receives a threatening letter that relates back to the men. She can not let well enough alone. As before, she ventures out on her own and this time finds herself in over her head.

Both Holmes and Selena must find links between an old acquaintance of hers and the men who had been after her. But will this lead to more trouble? They find themselves split up and now on a mission to save a dear old friend. The trap has been set but for whom? If only they had left well enough alone.


Posted by Jacquelyn Applegate at 6:12 PM No comments: 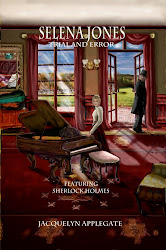